This is a guest post by Jeffrey C. Robinson. 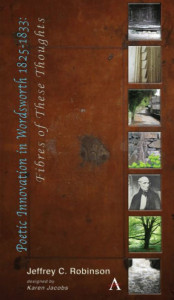 Author of Poetic Innovation in Wordsworth 1825–1833: Fibres of These Thoughts, out on Anthem Press this month.

In the 1980s I first gained sympathy for the poetry of the “late” Wordsworth while helping to edit the “Last Poems” volume of the Cornell variorum. In between long spring and autumn walks, winter evenings trying to keep warm huddled by a small fire and comforted by wee drams of whisky and shortbread, I spent day after day in the Wordsworth Library (Grasmere) poring over manuscript pages. These pages brought me closer to poetry then more or less unread. Critics in those years valued what Wordsworth wrote before 1807 much higher than what he wrote after, all the way to his death in 1850. This iron-clad view was indeed firmly set during his lifetime and still exists today (although scholars over the past 30 years have begun to revise it). Wordsworth himself said of his work in the 1820s, “my vein I fear has run out.”

Valued as one of the premier poets in the history of English-language poetry, Wordsworth called the poems in Lyrical Ballads (1798, 1800, 1802, 1805) an “experiment” in the language and content of verse designed to acknowledge the social and spiritual lives of the lower and lower-middle classes. The older successful poet of the late 1820s and early 1830s was—according to many readers from his own time to the present—no experimentalist. Only when absorbed in the manuscripts of the “late” Wordsworth’s poetry at the Wordsworth Library, Grasmere, did I intuit that the view of his work which reviewers and critics have characterized as politically conservative and religiously orthodox, and formally complacent, might not be completely true. Surely the poet of Lyrical Ballads capable of articulating and practicing a paradigm shift in what we can expect of poetry would not altogether lose that early intellectual energy, vision, poetic skill, and most of all a sense of exploration, over time.

Reading these manuscripts again and again particularly in the past seven years, turning the pages in his notebooks over and over, picking up a characteristic atmosphere of varying pen pressures, a range of penmanships, strike-overs, obsessions with certain words, phrases, and rhythms drew me into an intimacy with a writing and thinking process revelatory (or so I have imagined) of Wordsworth’s direction of thought and practice. I saw vitality there indicative of the experimental spirit applied to the making of his best poems. This book is a history of this experimental spirit working at full throttle even during a time which his best biographer (Stephen Gill) called “fallow.”

We do not typically associate the act and presentation of scholarly criticism with intimacy, yet that is what I have cultivated and sought to broadcast in this book. I have learned from the French theory of manuscript study called Critique genetique, in which a poet’s manuscripts afford not only the data of the “early draft” as information containing the “final,” publishable draft in embryo, but also the avant-texte, manuscript as an event in itself, with its data a swirl of composition and processual thinking. To make contact with the page as motion, or motions, requires—at least for me—an intimacy with its goings on. The motions are discrete, hidden, yet they register, as Wordsworth said, “the life of things” and “the dimpling stir of life”—a life of poetic consciousness, a different kind of data for the critic.

In that relationship between reader and text, I have noted that, while the physical page puts a fence around its contents, provides a limit, the page also projects itself outward to other domains of living that I have chosen to follow scrupulously: landscapes walked by Wordsworth, rooms in which he lived and wrote, family who copied out his drafts and participated in his thinking and writing, histories of poetic movements. The expansion of focus further includes my own walking and observing and my own original poems “found” in Wordsworth’s manuscripts and poems, and then, finally and crucially, other poems that he drafted during the same years.

In other words, as I worked on these materials, I found myself increasingly committed to an ever-expanding space that became a phenomenon of poetic activity. I have tried to represent this phenomenon on the pages of my book, with multiple coordinates for reading and viewing: notes not at the bottom of the page but along the side, colour images both of manuscript highlights and points in the landscape, paratexts from other writers, and colour displays of my own poems. All of this I interweave with a steady expository text stream. The subtitle of the book, “Fibres of These Thoughts” taken from a late-Wordsworth poem, vividly imagines thought and poetry and writing (in a manuscript) as texture of brain, muscle, and paper, no part extractable from the whole. I recast the phrase as characteristic of my book; what I hope will be a web-like recovery of a crucial period not usually acknowledged in the career of this great poet and his work.

← Aesthetics and the Cinematic Narrative: An Introduction
The Fuzzy Edges of Contemporary Theater →