This is a guest post by Michael Peter Bolus, Ph.D. Author of Aesthetics and the Cinematic Narrative: An Introduction, out on Anthem Press this month. 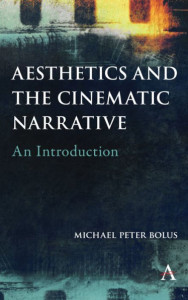 The welcome and entertaining distraction that defines most movie-going experiences has become the default expectation for general audiences. The commercial cinema, as a pop-cultural phenomenon, is rooted in an Escapist tradition that requires nothing from its audiences, other than a desire and willingness to be temporarily transported into another realm; to be fleetingly hypnotized by a viscerally enveloping, emotionally satisfying encounter. But cinema can also operate as a complex and demanding art form — one which requires a certain degree and type of effort on the part of its spectators. This effort issues from a given film’s adherence to a set of aesthetic strategies which might not be in alignment with a viewer’s prefabricated assumptions regarding commonly-held notions of what comprises a rewarding cinematic experience. Just as 17th-century Chinese lute music operates under a different set of aesthetic templates than 21st-century Hip-Hop, so too do different films and cinematic traditions employ various structural, stylistic, and thematic designs that might differ from one another in jarring ways.

An audience’s lack of familiarity with a specific film’s aesthetic foundations might result in a casual dismissal, a more resentful rejection, or even worse. As the 20th-century philosopher Jose Ortega y Gasset observed in his seminal essay, The Dehumanization of Art, if someone doesn’t like a work of art, but understands it, he feels superior to it. If he doesn’t like a work of art, and doesn’t understand it, he becomes hostile to it.

This, of course, implies that a comprehensive and accurate appreciation of certain artworks requires a brand of knowledge and understanding — an aesthetic sensitivity that, presumably, is denied to most people. This “organ of comprehension” (to use Ortega y Gasset’s own idiomatic phrasing) must be acquired and cultivated, lest our own organic, instinctual responses to art prevent us from apprehending the complexities of its ambitions. These “high-brow” assumptions smack of elitism in the pejorative sense; the problematic notion that great art is reserved for a rarefied realm that denies access to the uninformed mass.

But while our knee-jerk response to such apparently exclusionary attitudes is often abject dismissal, one must concede that many art objects do, in fact, demand a significant degree of familiarity — if not intimacy — with the uncommon aesthetic grammars which inform them.

Despite its profound and widespread appeal, the cinema is no exception.

Unfortunately, most film analyses which examine aesthetics as a philosophical discipline and/or artistic system tend to investigate and explicate the aesthetics of film rather than aesthetics and film. In other words, they work inductively to tease out and elucidate those filmic elements which are unique to the cinema, or, at least, are idiosyncratic components of cinema as a stand-alone art form. But how does cinema fit into the more over-arching evolution of the arts as both a creative and intellectual endeavor?

Aesthetics and the Cinematic Narrative: An Introduction attempts to place cinema in a much wider historical and aesthetic context that is too often overlooked by both filmmakers and audiences alike. By examining an array of traditional and diverse aesthetic traditions and stratagems — and, in some cases, the socio-political cultural contexts in which they are cultivated — the book makes connections between Aesthetics as a practical discipline and filmmaking as a creative process, while simultaneously providing interpretive strategies for the spectator who might be unfamiliar with the artistic heritages from which idiosyncratic strains of cinema emerge.

← Spring is in Full Swing at Anthem Press: New Titles
A Fibrous Weave of Literary Scholarship →