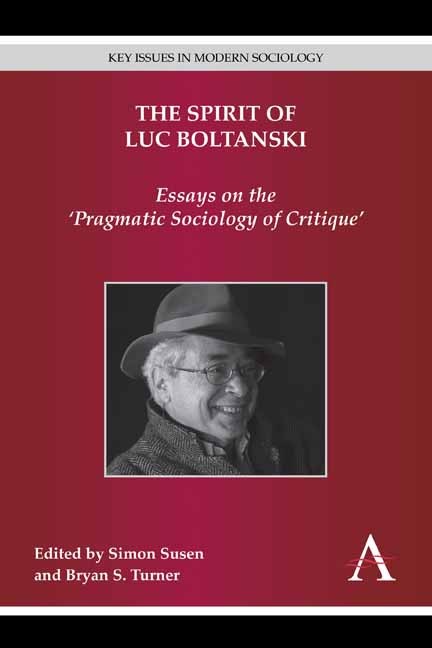 “This is a book that is needed to understand the ideas and research dynamics of one of the greatest contemporary sociologists. This impressive collection of essays provides not only an introduction to his work, but also insightful analyses of its reception, critical discussions on its wider significance, and reflexive comments by Luc Boltanski himself, all of which will make this volume a classic.”

This November, we are proud to announce that The Spirit of Luc Boltanski: Essays on the ‘Pragmatic Sociology of Critique’ is our Book of the Month! Professor Bryan Turner and Dr. Simon Susen have contributed a collection of essays that explore the theories of French sociologist Luc Boltanski, a leading figure in the new “pragmatic” school of French sociology. In the following interview, Dr. Simon Susen gives us more insight into Luc Boltanski’s work by explaining why he is not a “social theorist” and how he relates to other theories in the field of sociology:

Q: What made you choose Luc Boltanski and his theory in particular as a topic for a book?

Dr. Simon Susen: In our view, Luc Boltanski has emerged as the most prominent, and also most innovative, French sociologist since the death of Pierre Bourdieu in 2002.

Q: Do your previous publications such as The Legacy of Pierre Bourdieu relate to the content of this book?

SS: Without a doubt. Along with Loïc Wacquant, Boltanski is Bourdieu’s most influential disciple. It is impossible to make sense of Boltanski’s work without grasping the considerable influence that his “patron” (Bourdieu) had on his personal and intellectual development.

Q: Can you explain to us why Luc Boltanski’s theory is so popular in German and French Circles of Sociology but not in American and English Circles?

SS: To begin with, Boltanski refuses to call himself a “theorist” or a “social theorist”. In fact, similar to Bourdieu, he is suspicious of “theory” or “social theory” if it is (mis)understood as a merely conceptual – that is, theoreticist – endeavour. His approach (rather than his “theory”) is starting to have a considerable impact on the social sciences, not only in continental Europe, but also in the US and in the UK, as well as in many other countries. This influence is reflected in the increasing number of scholarly writings grappling with the importance of Boltanski’s work.

Q: You speak of a “profound gap (…) between the French-speaking and the English-speaking debates on Boltanski’s sociology”. Can you explain what you mean by a “gap”?

SS: In a nutshell, the former tend to be “Franco-centric”, whereas the latter – even when dealing with French sociologists – tend to be “Anglo-centric” (in terms of citations, cultural reference points, etc.). Our volume seeks to bridge the gap between the two “camps”.

Q: What would you say has been Boltanski’s most important influence and achievement in the field of sociology?

SS: The development of “The Pragmatic Sociology of Critique”.

Q: How can Luc Boltanski’s theory of the “pragmatic turn” be applied to contemporary sociology?

Q: Can you explain to us the difference or the parallels between Bourdieu’s theory and Boltanski’s theory of sociology with regards to human inequality?

SS: In essence, Boltanski maintains that ordinary actors are capable of understanding, problematizing, and criticizing structures of inequality; for Bourdieu, it is the job of social scientists to study these structures and the social forces – as well as the power mechanisms – sustaining them, because – in his view – ordinary actors are, to a large extent, seduced and misled by “doxic misrepresentations”.

Q: Is there a chapter or a specific area of focus in your book that you consider to be particularly significant? And if so, why?

SS: We think that each chapter makes an important contribution. Hence, it would be mistaken to suggest that one particular chapter stands out. It’s a huge volume…full of original contributions!

You can find out more about the book here or read an in-depth interview with Luc Boltanski himself!