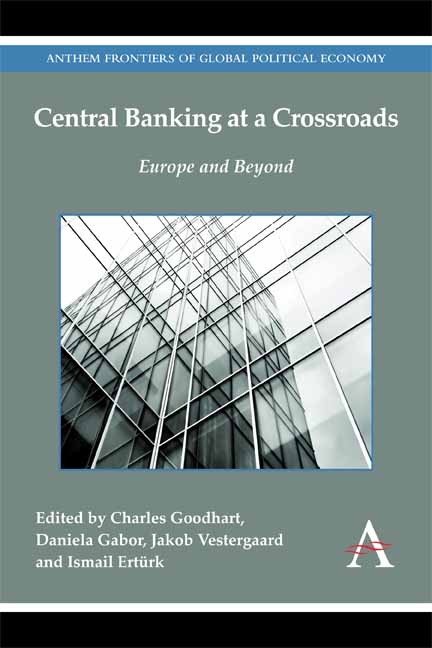 “This rigorous and novel investigation is a ‘must-read’ for all who either approve or disapprove of the unconventional instruments and practices used by central banks that have extended the mandate and blurred the traditional line between monetary and fiscal policy.” —Brigitte Young, University of Münster, Germany

“The book’s thought-provoking and sometimes controversial views are very welcome to the discussion even if one would not necessarily agree with all of them.” —Erkki Liikanen, Governor of the Bank of Finland

‘Central Banking at a Crossroads – Europe and Beyond’ is our Book of the Month for December. The book analyses the dramatic changes central banking has undergone post-Lehman Brothers and addresses the tougher questions: Have these changes allowed central banks to reach their inflation targets and ensure financial stability? One of the book’s authors, Jakob Vestergaard, a senior researcher at the Danish Institute for International Studies, agreed to answer a few of our questions.

Q: An alternative title to your book would have been, ‘Re-thinking Central Banking: Post-Crisis Successes and Remaining Challenges’. Could you explain to what extent we have to “rethink” the system of central banking?

Jakob Vestergaard: Three things are clear. First, unconventional monetary policy was necessary to handle the financial crisis of 2008 when widespread financial disruptions had rendered the key policy tool in conventional central banking, the short term policy rate, largely ineffective. Second, five years down the road it is difficult to discern whether any real healing has taken place: is the banking system more robust and resilient today, and has the global economy bounced back from the shock of the 2008 crisis? In many countries, banks are still not lending at a scale required to contribute to a pick-up in economic activity, and there is little to suggest that bank resilience to adverse macroeconomic shocks has significantly increased. This leads to the third point: with quantitative easing close to what many see as its limits in terms of positive effects on the economy, it does not seem obvious what central banks in core countries can do to escape the trap of disinflation and stagnation (such as is the current trend in the Euro zone and in Japan), nor how central banks in the periphery are to tackle a potential sudden reversal in capital flows. In my view, the practice of central banking needs a substantial rethink, to the extent of tearing down the walls – previously zealously guarded and policed – between fiscal, monetary and other macroeconomic policies. These policies must be developed and formulated in a much more integrated and coherent way, as opposed to well-intended, ex-post ‘coordination’. The era of ‘compartmentalized’ macroeconomic policymaking is over, or it will be soon.

Q: Can you highlight the key innovations that central banks have introduced since the financial crisis of 2008?

JV: Central banks replaced conventional tools with new instruments and practices beyond their mandates, thus blurring the traditional separation from private financial markets and from governments. For the past five years, central banks have intervened in both public and private debt markets, taking on functions of market makers or dealers of last resort. Some – as Bank of England – plan to formalize these interventions into their day-to-day toolkit. Our book offers meticulous examination of a number of the key innovations in central banking over these past few years, but it is also a book that takes a step back, to ask the tougher, more general questions: Have central banking innovations enabled them to reach their ‘traditional’ objectives in terms of inflation targets? From the Euro zone over Japan and to Brazil, that seems not to be the case. Have central banks, through their new unconventional tools, ensured financial stability? The concurrence of substantial asset price inflation with consumer goods disinflation and low, job-less growth in most Western countries, does not suggest to me central banking has been reinvented so as to be able to operate effectively in our post-crisis global economy. Banks that were too big to fail five years ago are even too bigger to fail today. Banks that were undercapitalized five years ago are still undercapitalized. To see progress in these important respects requires very strong looking glasses and a very generous eye too. Central banks have thrown trillions of dollars at dysfunctional financial markets, in ways that may or may not have been to some extent ‘innovative’, but the banking system is neither more robust or resilient, nor is it lending to the real economy at a significant scale. Shadow banking is growing in potentially destabilizing ways and there are few signs that central banks really know what to do about it; certainly, the notion that so-called macro prudential policies will come to our rescue in managing new unsustainable credit booms seems optimistic at best. In the meantime, most economies are either in recession, stagnating or experiencing a considerable slow-down of economic activity.There is still a long way to go, I think, before we have new modes of thinking that tackle the key problems, as opposed to just pushing them ahead of us, in a process that may well only makes them larger (even if, for a while, less visible). 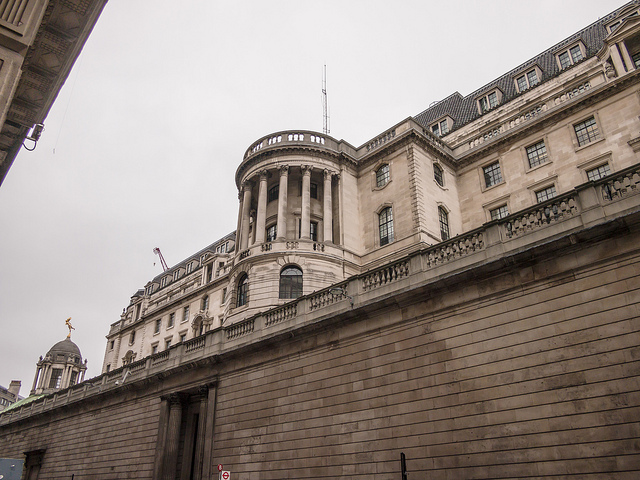 The Bank of England, London

Q: Why does there exist an observed reluctance to seriously recapitalize Europe’s banks by imposing a de facto ceiling on capital requirements?

JV: Europe’s most recent Capital Requirement Directive, the CDR4, stipulates that if countries wish to impose higher capital requirements than those laid out in CRD4, they must ask permission from European authorities. For me, this constitutes a de facto ceiling on capital requirements. National authorities will be extremely reluctant to take such as step, for a range of reasons, including the negative signalling effect to financial markets. It’s would be akin to officially declaring, ‘Our banks are in the deepest possible mess, much worse than anywhere else in the EU.’ So, it’s not going to happen. The political rhetoric that drives this part of the CRD4 is the ideal of an internal market in financial services and a level playing field for European banks. But this is just one of many expressions of the European reluctance to seriously recapitalize its banks. In negotiating Basel 3, it was the Germans and the French that most fiercely resisted adoption of a minimum requirement for equity funding to total liabilities (a leverage ratio). The result was that a very low leverage ratio was adopted, based on a too broad category of capital, to be binding on banks only by 2019. The largest German and French banks still fund themselves with only approximately three per cent equity and 97 per cent debt, and they are quite happy with this ‘business model’, and all the government subsidies that it comes with, whether directly or indirectly.

Q: If, as you say in Chapter 5, the recapitalization orchestrated by the European Banking Authority (EBA) ‘is considered shallow and fails to bolster Europe’s ailing banks’, what alternative method do you recommend to strengthen their resilience?

JV: I am not suggesting that Europe should do something else. I am suggesting that our European institutions should do what they say they do: recapitalize Europe’s banks. Only seven out of the 24 banks that allegedly were ‘recapitalized’ in the 2012 recapitalization exercise, actually increased their ratio of equity funding to total assets. This is the magic that capital ratios measured relative to so-called risk-weighted assets offer to banks and regulators: banks that have raised basically zero new capital can come out of a recapitalization exercise appearing to have been significantly recapitalized. Europe should recapitalize its banks such that its equity funding to total liabilities increase to at least seven per cent over the next three years, starting by reaching five per cent by the end of 2015. Impossible? Of course not. If banks fail to raise capital on their own, public funding can be provided to fill the gap. This would be a much better use of public money than the repeated provisions of cheap liquidity that we’ve seen in recent years.

Q: In Chapter 5, you state that the core problem of continued undercapitalization of European Banking lies in the core of the Euro zone: French and German banks. Could you elaborate what you mean by that?

JV: Few banks in Europe are as poorly capitalized as the largest German and French banks. This remains the case following the latest stress testing and asset quality reviews of the European Central Bank and the European Banking Authority. The results were released in late October. Of course, these banks are also so much larger than any Greek, Portuguese and Irish banks, that to look anywhere else for the core of the problem makes little sense. If you take EBAs adverse scenario at face value (which you should not, because it is far too mild), the four largest French and four largest German banks would be more than 220 billion Euros short of a five per cent threshold for equity funding (according to calculations in an ongoing study). This corresponds to almost 40 per cent of the aggregate capital shortfall for all 123 banks included in EBAs stress tests. This is what I mean. Seen against this background – and bearing in mind the continued close interlocking of the European bank and sovereign debt crisis – the moralizing discourse in core countries of the Euro zone about the ‘problem countries’ in its periphery, is problematic.

Q: What will the European ‘recapitalization reluctance’ mean for the financial prospects of the European Union?

JV: ‘The main function of economic forecasting is to make astrology look respectable,’ Stanford economist Ezra Solomon famously said. I invoke Solomon here because I’m reluctant to make predictions about the financial prospects of the EU. Others are much better placed than me to do this. But a few points can be made. Several studies show a positive correlation between equity funding on one side, and resilience and lending on the other side. The longer European countries drag their feet on recapitalizing its banks, the slower will be the economic recovery in Europe (when eventually it comes) and the weaker its banks will stand in global competition for market shares. Thinly capitalized banks may be good for return-on-equity (ROE) performance, but they are good for little else.

JV: I stress that the views expressed are mine, not those of my co-editors or other contributors to the book. I take full responsibility for any errors and misjudgments committed.

For more information, check out the book’s webpage here.

← November Book of the Month: “The Spirit of Luc Boltanski”
BBC’s India’s Daughter and the Shock to Collective Consciousness →