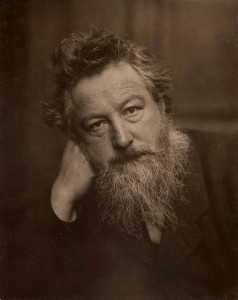 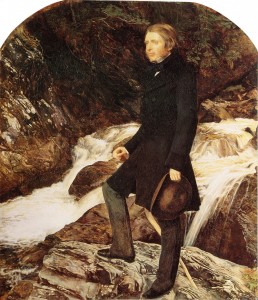 In late nineteenth-century Britain, theorist and critic John Ruskin and the designer, writer and activist William Morris began pioneering new approaches to design and the decorative arts. But what sort of relationship did they have and how did their approaches to crafts and politics differ? Dr Mark Frost, author of The Lost Companions and John Ruskin’s Guild of St George: A Revisionary History, explores the connection between the two most influential figures of the Arts and Crafts Movement.

In recalling encounters with William Morris in the 1880s, W. B. Yeats spoke of asking him what led up to the Arts and Crafts movement. Morris replied:

“O Ruskin and Carlyle, but somebody should have been beside Carlyle and punched his head every five minutes.”

The remark, amusing as it is, reveals a great deal about differences in the approaches – to crafts, practical work, and politics – of Ruskin and his disciple, Morris. Ruskin remained deeply indebted to his ‘master’, Thomas Carlyle, and powerful strains of Carlylean authoritarianism darkened his otherwise radical political outlook. Morris, by contrast, managed to extract what he saw as the most productive elements of Ruskin’s vision while rejecting all of its Carlylean elements.

Morris shared Ruskin’s belief in the superiority of medieval crafts. He imbibed Ruskin’s conviction that a nation can be judged by its aesthetic productions; that an immoral nation is incapable of creating great art; and that only non-mechanical, freely creative crafts could produce genuine beauty.

This message, articulated most effectively in the chapter entitled ‘The Nature of Gothic’ in the second volume of Ruskin’s The Stones of Venice (1851, 3 vols), a work described by Morris as ‘one of the very few necessary and inevitable utterances of the century’, sought not merely to inspire beautiful buildings, paintings, and crafts, but to transform what Ruskin saw as the inhuman conditions of labour endured by Victorian workers.

Morris was so inspired by Ruskin that he produced an 1892 edition of The Nature of Gothic for his Kelmscott Press, influenced by Ruskin’s insistence on the virtues of high quality hand labour. Morris’s amazing Kelmscott books, like the famous William Morris & Co. wallpapers, textiles, ceramics, furniture, metalwork, and glass, represent the finest flowerings of the Arts and Crafts movement that Ruskin did so much to inspire. While Morris & Co. was a commercial success and provided a fine school for many workers, it also underlined the limitations of arts and crafts as a genuine challenge to modern industrial practices because such products were so expensive that they could never reach large sections of the mainstream market.

This limitation was even more evident in of one of the craft experiments with which Ruskin was associated. The Langdale Linen Industry, a revival of Lake District spinning and weaving led by Ruskin devotees, Marian Twelves and Albert Fleming, only ever found a market amongst wealthier buyers, including some illustrious aristocratic figures. The Linen Industry was loosely connected to Ruskin’s major utopian venture, the Guild of St George, begun in 1871 and conceived as a means to fundamentally challenge the steam-powered dragons of Victorian modernity.

Ruskin hoped that the Guild would attract many adherents or ‘Companions’ and create a series of agricultural and artisanal communities devoted to hand labour, fine products, and the socially transformative effects of non-mechanised land work. They would, he believed, encourage sustainable practices and environmental good practice. The reality, sadly, was much more modest – less than a hundred Companions joined the Guild and its projects were relatively few in number. It was also a disaster for a significant number of young idealists who signed up as agricultural Companions only to find that their time on Ruskin’s estates around the country was a nightmare of drudgery and neglect.

Their stories are only now being fully understood. A number of reasons have routinely been forwarded for the failure of the Guild to fulfil its laudable intentions. These have included Ruskin’s failing mental health, his incapacity in the organisation of practical schemes, and the disastrous impact of his failed relationship with Rose La Touche, the young Irishwoman he had pursued from the mid-1860s until her tragic death in 1875. While these were certainly contributory factors, the Guild’s principal weakness was arguably the adverse effects of Ruskin’s authoritarian politics.

For the Guild’s agricultural Companions, Ruskin’s authoritarianism meant that they were consigned to obey while suffering neglect, or to submit to the leadership of unscrupulous and unsympathetic local agents. Embracing the Guild with genuine zeal, they found all possibilities to exercise personal agency in the Guild’s work barred to them, while all of the potential energy and creativity that they might have used to make the Guild estates succeed was squandered – with often tragic consequences.

In Morris’s fictional utopia, News From Nowhere, contented citizens lived in creative harmony amidst beautiful landscapes while effortlessly producing exquisitely beautiful goods and a plenitude of necessities. They do so because their shared commitment to socialism rested on fundamental principles of egalitarianism and libertarianism. Whether such a society is possible in reality remains an open question, but Ruskin’s Guild certainly offered the painful lesson that it is simply impossible to combine ideals of free, creative labour with authoritarian power structures.