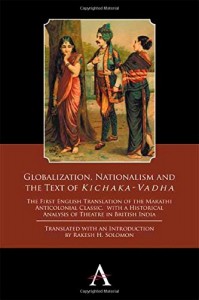 As India celebrates its 68th anniversary of independence from colonial rule, many look to the massive political demonstrations and innovative theorists that prompted sociopolitical change. While such things were highly effective in attaining independence, a number of playwrights in colonial India crafted didactic works that forced an Indian audience to ponder existing political situations with the use of allegory and subtle suggestion that prompted social change. Even with close political censorship enforced by the British Raj, playwrights such as Krishnaji Prabhakar Khadilkar laced their plays with coded political messages that supported the end of colonial rule.

In the very first English translation of Kichaka-Vadha, Globalization, Nationalism and the Text of the “Kichaka-Vadha” , Rakesh H. Solomon of Indiana University Bloomington offers the most extensive scholarly analysis to date on the Marathi play. With the use of colonial-era police, judicial, administrative, legislative and newspaper sources, this study highlights the allusions in the play that parallel Indian political circumstances of the time and the dramaturgic tactics used to prompt political change.

For more information, check out the book’s webpage.

← August Book of the Month: “Women, Gender and Everyday Transformation in India”
The Ruskin–Morris Connection →