When Will Natural Gas Prices Normalize, and How Will We Know When They Are Normal?

[This analysis of the current natural gas pricing crisis is an extension of the concepts presented by the author in Foundations of Natural Gas Formation – Misunderstandings Jeopardizing the Future of the Industry, Anthem Press 2020.]

The EUs cap on natural gas prices that becomes effective on February 15, 2023, clearly shows the EU’s disenchantment with the hub-based price formation mechanism. European politicians and energy companies previously fiercely promoted hub-based as the best method for EU gas markets to replace “outdated” oil-indexed pricing, which was considered to be too slow in responding to market signals. Now it turns out that the hub-based pricing mechanism is not working flawlessly and has undoubtedly overreacted to market signals, sending prices to heights never seen before.

In this crisis, EU politicians have not questioned the validity of hub-based pricing. They claim that a combination of external transient factors has caused the current price turmoil. Consequently, they have implemented the controversial tool of price capping as only a temporary measure until the time when the market rebalances itself.

However, there is no guarantee that this rebalance will take place within the 2-3 years that are commonly projected. This uncertainty raises legitimate concerns among the proponents of hub-based pricing. In a letter to the Financial Times published on September 7, 2022, Jonathan Stern, Oxford Institute of Energy Studies, wrote, “such actions will have longer-term consequences and could signal the end of the liberalized and competitive European gas market which took 30 years to create.” In fact, the EU is not one, but two steps back in market liberalization by bypassing oil indexation as a proven market-based mechanism for price formation and moving straight forward to price regulation.

Regulated pricing is nothing new in the natural gas industry. According to the latest Gas Price Survey, regulated pricing covers 40% of the world’s natural gas production and 28% of imports. However, a move away from the market to regulated pricing in developed economies is something new. It is taking place not only in Europe but in Australia too, where the parliament has caped domestic natural gas prices for a year starting in December 2022 in order to protect local consumers from Asian buyers.

The European and Asian regional gas markets are very similar in having abnormally high spot prices not observed anywhere else in the world. Will these prices eventually normalize? How do we know that this normalization has occurred? Indeed, as the world enters the era of inflated energy prices one can hardly expect a return to hub prices prevailing prior to 2021.

The definition of normality might come from looking at natural gas market fundamentals. The fundamentals of gas pricing organically incorporate two forms of competition: gas-on-gas and gas-on-substitute fuel. No other global commodity has this profound duality. The first form of competition is between different sources of natural gas and the supply and demand interaction. The second form is the competition between the use of gas as an energy source and the use of another carbon fuel as an inter-fuel source competition. The operation of gas-on-substitute competition is a form of comparative pricing on an energy equivalent basis between gas, oil, and coal and the influence of this price on consumer choice of source of supply.

In a period of stable natural gas price behavior, the natural gas price can move above or below the price resistance levels set by the alternative fuels but only for a short period. To illustrate how inter-fuel competition has been strong enough to force gas prices back into the price envelope set by oil and coal prices, see Chart 1. 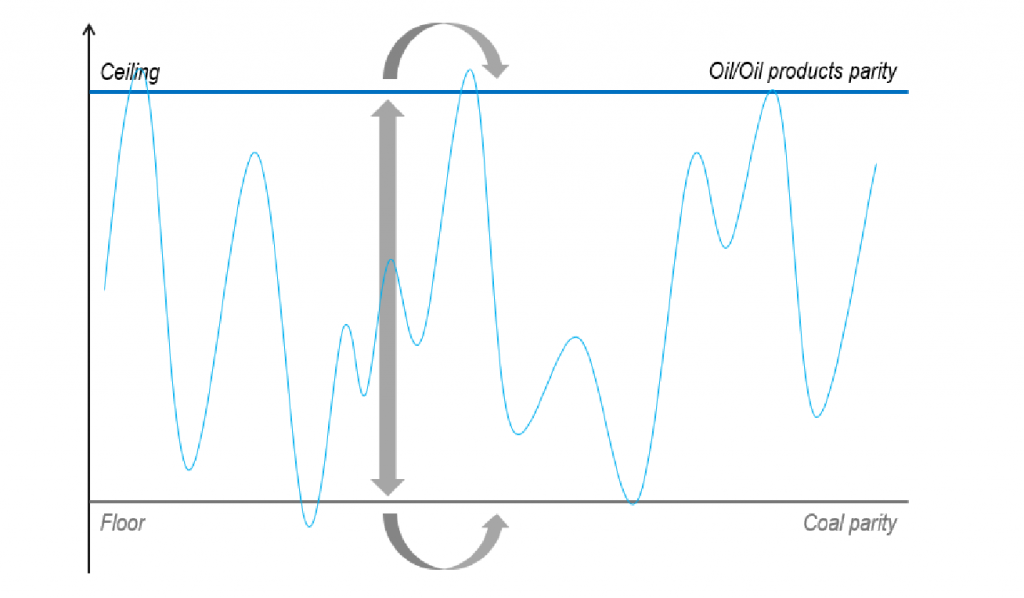 In 2019-2020, gas prices behaved abnormally with the price of gas dipping below coal price parity for a prolonged period. The divergence from prior price patterns in 2019-2020 was the result of low seasonal demand, Covid shutdowns, and the wave of US LNG projects, which destabilized the global LNG markets.

The second phase of abnormal price behavior that began in 2021 was characterized by strong competition between Europe and Asia for spot LNG. This second phase of unstable developments in hub pricing is still taking place. The unprecedented tightness of supply in the market may stay for at least another two or three years. It originates from a broad variety of factors, with geopolitics playing an important role. Abnormal prices in Europe and Asia have decisively surpassed the oil parity resistance level. In August 2022, gas prices were three times more than the price of oil, as shown in Chart 2. Moreover, coal prices surpassed those of oil for several months as an alternative fuel to natural gas. 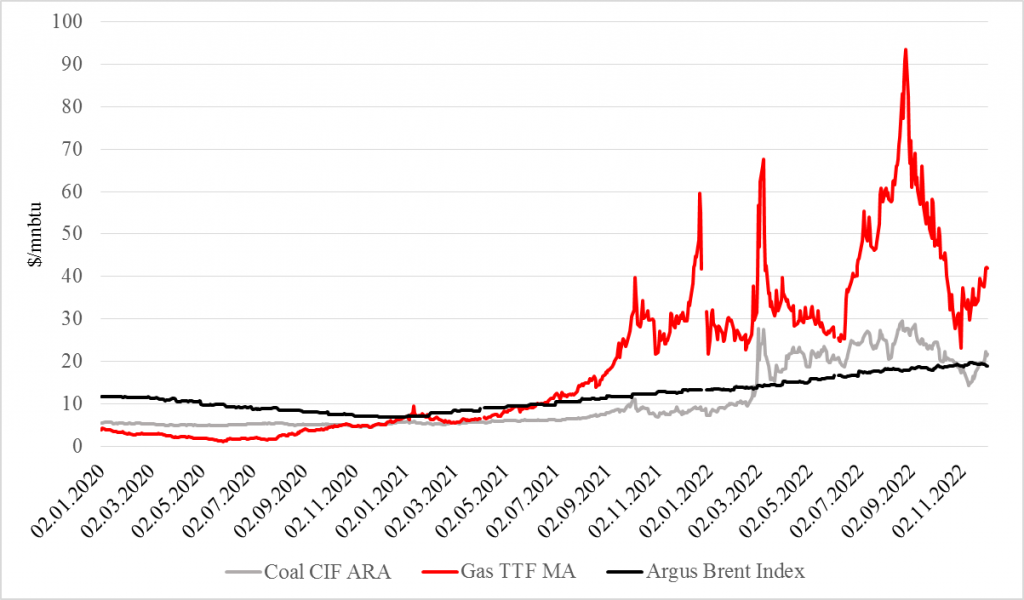 Is there a chance for natural gas price normalization? In accordance with Hubbert’s peak theory, demand for oil will be on a declining curve at some point in Europe. However, for years to come oil prices will remain strong enough to set the upper limit for the prices of natural gas if the market for natural gas rebalances itself.

The LNG market has the potential for rebalancing as new liquefaction projects will come on stream over the next several years. QatarEnergy alone plans to expand its LNG liquefaction capacity from 77 to 126 million mt/year by 2027. In all, the capacity expansion will cost $28 billion.

But doubts still remain. A significant part of the new liquefaction capacity expansion has yet to receive backing in the form of new long-term supply contracts that can act as security for project financing. Meanwhile, the majority of European and a few Asian clients are reluctant to make long-term commitments to such supply contracts.

Insufficient investments in fossil fuels present a major threat to the global natural gas market, including both LNG and pipeline gas. The EU price cap policy is a false solution to this problem and makes the gas industry even less attractive for investments of all kinds.

← How Do We Avoid Becoming Numb to the Crisis in Afghanistan? by Christina Lux, Mohabbat Ahmadi, and Ignacio López-Calvo