Five years ago, the UN passed the 2030 Agenda for Sustainable Development. This resulted in the establishment of seventeen different goals, more commonly known as the Sustainable Development Goals (SDGs), accompanied by 169 targets and indicators to achieve this agenda by 2030. Building upon the Millenium Development Goals (MDGs) and what both supporters and critics might acknowledge was at best, haphazard success, the SDGs are distinct in major ways.

First, the very process of collaboration over the 2030 Agenda was far more inclusive than with the MDGs, with a wide range of NGO and civil society actors participating in the 2015 UN Sustainable Development Summit. The SDGs consist of seventeen goals, rather than eight. The goals and objectives of the SDGs are also unprecedented both in scope and ambition. Inequality is presented as a global issue, not tied to country indicators, but rampant within, between, and across national boundaries. The environmental sustainability of our planet cuts across numerous goals, framing our economic and political systems as interdependent and requiring greater cooperation and collaboration. The SDGs apply to all countries, unlike the MDGs, which were directed towards “developing” countries only. Major issues such as hunger, poverty, armed conflict, etc. are to be eliminated, reaching their statistical zero, rather than halved or portrayed as social ills countries must work toward reducing by some generous proportion.

These are not insignificant differences. The 2030 Agenda and SDGs demonstrate an increasingly globalized development community — one that acknowledges the need for greater collaboration and cooperation, and actually directly acknowledges the connections between a range of issues, their symptoms, and the political and economic systems that govern human societies. In turn, the SDGs actually explicitly address issues of conflict, justice, and political institutions. Goal sixteen is perhaps both the most overtly and vaguely political in this regard. The targets for this goal include reducing violence “everywhere” (16.1), promoting rule of law and ensuring equal access to justice (16.3), developing effective, accountable and transparent institutions (16.6), and strengthening national institutions to prevent violence and combat terrorism and crime (16.A). In short, this goal is reaching for world peace, or at the bare minimum, some formal establishment of a globalized system of justice and accountability.

But what does this really mean in practice? The UN, affiliated institutions, and the Member States fail to deliver here. It is already a monumental task to maintain the integrity of such institutions on national scales, but should this objective not also acknowledge the need for fostering such accountability not only within, but between states and coalitions of states? The same year UN Member States adopted the 2030 Agenda, many of these same states — also members of NATO — participated in the launch of the US-led Operation Freedom’s Sentinel (OFS). OFS is a scaled back continuation of the thirteen year Operation Enduring Freedom (OEF), marking a major shift in how the US and NATO allies framed their occupation of Afghanistan. Instead of embarking on the major military operations that defined OEF, the international coalition would transition to a primarily training and assistance role. Their ambition is great — to develop self-sufficient Afghan forces capable of maintaining security without an international presence. This objective in many ways reflected a quiet acknowledgement among US government, military, and aid workers, actively concealed from the public throughout the occupation of Afghanistan: that the war failed and required an exit strategy.

Development and aid were used as strategies to expedite military outcomes in Afghanistan. Particularly between 2009 and 2012, aid was flooded into the country to build schools, bridges, canals, and other civil-works projects as a tactic to centralize institutions and improve security, acknowledged by aid workers as a “colossal misjudgment, akin to pumping kerosene on a dying campfire just to keep the flame alive (Whitlock 2019).” It begs the question why the magnitude of international failure in Afghanistan was not a more explicit factor in the establishment of the 2030 Agenda and the SDGs, particularly with regards to issues of peace and poverty. How can these goals be achieved when addressing the economic and political relationships that facilitate the symptoms of global systemic inequality and injustice are not explicit objectives?

As the US and NATO allies tire of a two-decade war, negotiation with the Taliban has been widely accepted as the only path towards withdrawal and potential peace. That said, talks have been on and off. The Taliban’s stance on human rights, in particular the rights of women and freedom of expression, among issues pertaining to disarmament, complicate the absolute viability of the SDGs. The 2030 Agenda promised to, “provide a shared blueprint for peace and prosperity for people and the planet, now and into the future (SDGs 2020).” In considering the SDGs and the future of global agendas, we cannot ignore the contradictions that exist between agendas and relationships. As the signatories of this agenda continue to occupy a military presence in Afghanistan, it is fair to ask, how does the broader development community reconcile the heritage of waves of international invasion instigated by their own states within societies which resist and distrust national systems? It is a complex question, one that remains unresolved and resides deeply within the vision of the 2030 Agenda. Acknowledging the mistakes of the donor community, particularly with regard to violent conflict, displacement and poverty, must be an integral part of any meaningful global effort toward sustainable development. If the failures of the international community in Afghanistan continue to be neglected amid the fanfare of cooperation surrounding the 2030 Agenda, efforts to sustainably develop our world will only perpetuate the very systems of inequality and injustice they seek to move beyond.

Avideh Mayville, Ph.D, is a program manager, researcher, and leader with over a decade of experience across non-profits, think tanks, and higher education institutions. Her areas of specialty include globalization and development policy, development in conflict environments, the security-development nexus, and human rights-based approaches to development. She writes about these issues in her personal blog: Aid, Olive Branches, and Machine Guns.

The Transformation of Capacity in International Development (Anthem Press, November 2019) is her first book. 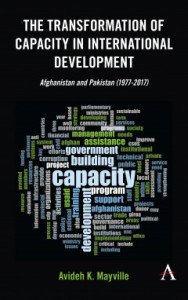 ← The Art of Startups: do you really need an MBA to launch your company?
Talk of the Town: 5 Things that Happened in the Publishing Industry in March 2020 →