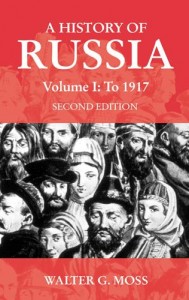 The academic field is always evolving and changing. New ideas and concepts are frequently being introduced and, as a result, textbooks with the most up-to-date information are in demand. The academic publishing industry has responded to this need and new texts are constantly being published. These days, professors and students have more options than ever to pursue their studies.

However, in the haste and urgency of it all, many textbooks get lost in the queue or their shelf life is far too brief when compared to the amount of time and energy put in by the scholars who write them. The concern is then: how do you write a textbook that not only gets noticed but remains relevant and useful beyond the first years of its publication?

For almost 10 years now, Walter G. Moss’s book, ‘A History of Russia (Vol I)’ has been used in classrooms throughout the US. In fact, just this semester a professor made it a required reading text for a Russian history course at Harvard University. So, with almost a decade of success, we asked him why he thought his book has prospered over the years.

Additionally, Andrew Gentes, a lecturer in Russian and European History at University of Queensland, said that Dr Moss’ book ‘manages to embrace a wide range of topics while at the same time remaining accessible and interesting…Balances humorous anecdotes with provocative concepts, and discusses historiography in a clearer and more contemporary fashion than that found in Riasanovsky’s ‘A History of Russia’, now in its sixth edition and looking a bit musty by comparison…There is little to fault with this volume.’

History texts naturally lend themselves to a longer shelf life, as opposed to other more time-sensitive subject matters such as digital media, business marketing, or contemporary scientific theory. But what makes a good book remains the same at its core. If you can capture that essence, it too will stand the test of time.

Read more about the ‘A History of Russia (Vol I)’ here and/or check out Vol II, here.