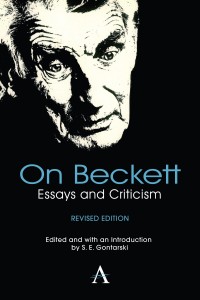 Over the past year, we have been working on developing our Anthem Studies in Theatre and Performance series. Looking at a wide range of theatre, from historically traditional forms to less structured, contemporary acts, this series seeks to analyse one of the most dynamic aspects of culture with a broad, global perspective.

This December, we released a book on writer and theatre director, Samuel Beckett, titled ‘On Beckett.’ This book, edited by S. E. Gontarski, features a collection of writings about the Nobel-Prize winning author, providing both an insight into the man as well as his complete works:

‘On Beckett’ brings together some of the most perceptive writings from the vast amount of scrutiny that has been lavished on the man; in addition to widely read essays there are contributions from more obscure sources, viewpoints not frequently seen. Together they allow the re

ader to enter the world of a writer whose work has left an impact on the consciousness of our time perhaps unmatched by that of any other recent creative imagination.

Additionally, we are pleased to share that one of the books in the series, Molière on Stage, What’s So Funny? by Robert W. Goldsby, has recently been included in Choice’s annual ‘Outstanding Academic Title’ list. The book was chosen for its ‘excellence in scholarship and presentation, the significance of [its] contribution to the field, and [its] value as an important treatment of the subject.’ The book analyses the playwright’s works both in a contemporary and historical context, exploring Moliére’s attempt to ‘fulfil the universal need for union’ with his writing through laughter. Read more about the book here.