The guest author of this post is Blake Stricklin. He is a lecturer at the University of Houston – Victoria and the author of ‘American Paraliterature and Other Theories to Hijack Communication’. 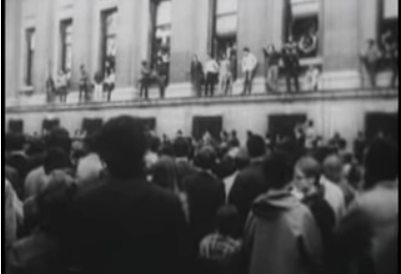 In April 1968 students at Columbia University overtook the campus. Members from Columbia’s Student Afro-Society (SAS), Students for a Democratic Society (SDS), and other activists occupied Hamilton Hall and Low Library to demand that the university’s administration end their ties with the Institute for Defense Analysis and halt construction of a segregated gym in Morningside Park. During the occupation, students imagined a new curriculum of “liberation classes.” Yet a month later, the NYPD would end the student protest with violent force.

In a 2020 letter to Columbia president Lee Bollinger, Mobilized African Diaspora (MAD), a coalition of Black students at the university, wrote: “We have been writing and signing and protesting for over 50 years.” One can hear echoes of the 1968 protests when MAD explain how Columbia “destroyed much of the once majority Black neighborhood of West Harlem” with the construction of its Manhattanville campus. In its community, Columbia acts more like a landlord with dreams of building the “new urban campus of the 21st century.” Yet as MAD make clear in their letter to Bollinger, “urban” for Columbia means displacing “thousands of Black and Latinx West Harlem residents.” And as with any institution interested in real-estate development, there is a resolve to protect their private property. In his “Report from Occupied Territory,” James Baldwin observes that the police exist to keep the Black community in “[their] place and to protect

You can read MAD’s demand letter to President Lee C. Bollinger in full at https://docs.google.com/document/d/1yLZN0AyGZlvpnNxzbc9osaWMMeI7WjxGJo0Ujc1x98I/edit#

white business interests […] they have no other function.” While MAD admit that Columbia does not have any public contract with the city police, they note in their letter to Bollinger that those who head Columbia Public Safety are “multi-decade veterans of the New York Police Department.”

With MAD, Columbia’s Young Democratic Socialists of America (YDSA) demand that the university end its expansion in West Harlem and defund Public Safety. In a separate letter to the university’s administrators, Columbia YDSA find that the “administration’s unilateral decision-making process has perpetuated the existence of these injustices in [their] community despite possessing ample resources to confront them with structural solutions.” In addition to an $11 billion endowment, one of these resources for Columbia comes from increased student tuition. But as Columbia YDSA state in their letter, the university must reduce the cost of tuition and increase financial aid by at least 10 percent. If the administration failed to listen to their demands, YDSA and over 2,000 students were prepared to withhold tuition. Since the tuition strike started in early 2021, Columbia has charged students over $157 thousand in late fees.

With their billion dollar endowments, Ivy Leagues like Columbia are invested in reproducing a world their striking students want to dismantle. As one student occupier in a documentary on the 1968 Columbia revolt remembers, the faculty “could not see beyond the occupation of the building toward something that could be better.” We might ask if this vision includes abolishing the Ivy League and other “elite” institutions of higher education entirely.

Yet what about universities that are not flush with cash from billion dollar endowments? Even before the pandemic, talks of a crisis in public higher-ed had become cliché. But as Fred Moten and Stefano Harney write in “The Academic Speed-Up,” a “crisis might prove a good way to explain the Sixties and Seventies,” where many professors “were unable to overcome the structural changes in capitalism that were once let loose in the Seventies and policed into regularity in our own time.” The austerity politics now commonly accepted and enacted by government officials and administrators takes us back to a different New York University. The City University of New York (CUNY) once offered tuition-free classes to all students. Yet in 1975, New York City was on the verge of bankruptcy. Gerald Ford infamously told city officials asking for federal assistance to drop dead. Despite protests from faculty and students, CUNY relented to pressure to charge tuition in order to receive funding. As Kim Phillips-Fein writes in Fear City, “the arrival of tuition at CUNY seemed to be in keeping with national trends toward much more expensive college bills that would soon set higher education apart as the province of the elite.”

1968-1975-2021. These dates suggest a continuity of protest against anti-Black violence, austerity and forced precarity. Those who are striking at their universities and workplaces now are imagining something beyond the limited imaginations of their institutions.

James Baldwin, “A Report from Occupied Territory,” first published in The Nation (1966). Accessed on April 16 2021 https://www.thenation.com/article/archive/report-occupied-territory/

You can read the Colubmia YDSA demand letter at https://docs.google.com/document/d/1Vcs6NU5qBD983q99OXqKUcbNunXiIHFtseUvC-InLSo/edit

Columbia Revolt is a 1968 documentary on the student protests directed by the Newsreel collective.