Although he was savvy enough to warn his French publisher of “this adaptation business” as requests for English language rights for En attendant Godot began to arrive in Paris in mid-1953, Samuel Beckett seems to have had only the scantest idea of how completely commercial theatre was imbricated in “this adaptation business” (The Letters of Samuel Beckett [hereafter LSB], 1941-1956, Volume II, 2011, 379). By early May 1953, Beckett was responding to a specific proposition from American writer and director, Garson Kanin, who was already working with his Broadway colleague, Thornton Wilder, to adapt En attendant Godot. After Beckett’s warning, his French publisher, Jérôme Lindon, communicating through French producer and intermediary, Denise Tual, acknowledged that English language performance rights were still available (LSB, 2011, p. 380n1). Two days later he received another inquiry, this time, directly from London agent Rosica Colin, asking about the English language rights to all of his work and, further, proposing a club performance of Godot. Beckett replied on 19 May:

Re English and American rights to my work in French I think you would be well advised to get in touch with my editor [i.e., publisher] Monsieur Jérôme Lindon [. . . ]. He knows better than I how things stand. I am not even sure that they are still available (LSB, 2011, p. 380, 381n1). 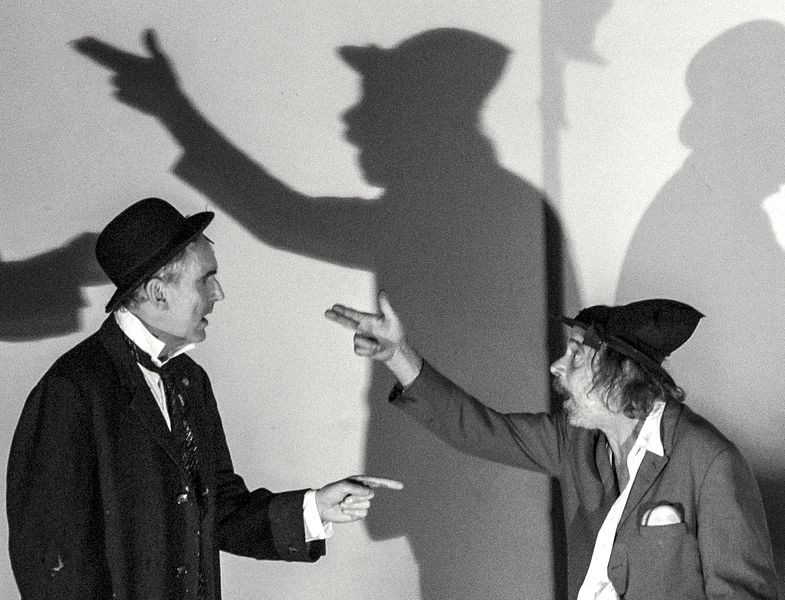 The strictures he would subsequently impose on performances of his theatre works were one response to such reservations about adaptation as he was beginning to be drawn into the world of commercial theater where adaptation was the norm, although he would be less than consistent, even whimsical at times in enforcing those strictures. In 1953, however, Beckett’s response to the possibility of “adaptation” now seems mild, understated. He seems to have intuited, at least, that theatre works always have something of a flexibility, an elasticity — in short, an adaptability — to the point of multiple configurations. Producers, theater directors, actors, and translators have been theatre’s chief re-configurers, but the author himself would finally enter “this adaptation business” to recast his work through his various and multiple creative roles, and he understood, finally, that theater by its nature is malleable; all performance is adaptation. Beckett himself plunged into the “adaptation business” by 1962 as he re-rendered, perhaps even re-authored, Robert Pinget’s radio play “La Manivelle” as “The Old Tune,” both versions published by one of his British publishers, John Calder. Beckett’s rendition is acknowledged thus: “English adaptation by Samuel Beckett.” We might say the same of his directorial debut, re-rendering Pinget’s “L’Hypothese,” which he directed with actor Pierre Chabert in 1962, the work described by its publisher as follows:

[It is the improvised, babbling, screwy, angry, very funny lecture by a writer who tells the vague, implausible story of a manuscript that ought to have been thrown into a well, but nothing is less certain, because there are no wells around and it could be that the manuscript is mostly made of blank pages.]

One direct parallel of “this [theatrical] adaptation business” may be with the world of film where the issues are often posed in terms of contrasting theories. On the one hand, the auteur theory of filmmaking, coined by Andrew Sarris, refers principally, or at least initially, to French New Wave filmmakers. Associated with the journal Cahiers du Cinéma in the late 1950s and 1960s, the auteur theory views the director as the author, “auteur,” of the work and so in control of the entire process from earliest notes to final editing and showing. Such a tradition continues through a new New Wave of contemporary French filmmakers; through the critically acclaimed films of Olivier Assayas, Jacques Audiard, the Dardenne brothers, Michael Haneke and Francois Ozon. On the other hand, Pauline Kael, one of Sarris’s most ardent critics, advocated for a more collective and collaborative mode of real word filmmaking. That is, the work of art is not the product of a single individual’s inspired efforts but the result of myriad collaborators and a cultural confluence of economic, political and a plurality of creative forces of which the generating artist is only a part.

A collateral question arises concerning the reproduction of the cultural artifact, and in theatre, which entails frequent, if not nightly, reconfigurations. Amid broad cultural assumptions of originality and authenticity, an issue often related to cultural property, is the nagging issue of whether reproduction is, necessarily and by definition, a second order of creation, inferior, a fake, or whatever the antonym of authentic is. Is it a copy, merely a simulation of something deemed original — or, itself, a new original, a new creation, entity or event, the position advocated by Orson Welles, particularly for his Shakespeare films? Welles often refused to call his film of Franz Kafka’s The Trial an adaptation, as he told BBC interviewer Huw Wheldon shortly after completing the film:

WHELDON: Do you have any compunction about changing a masterpiece?

WELLES: Not at all, because film is quite a different medium. Film should not be a fully illustrated, all talking, all moving version of a printed work, but should be itself, a thing of itself. In that way it uses a novel in the same way that a playwright might use a novel — as a jumping off point from which he will create a completely new work. So no, I have no compunction about changing a book. If you take a serious view of filmmaking, you have to consider that films are not an illustration or an interpretation of a work, but quite as worthwhile as the original.

WHELDON: So it’s not a film of the book, it’s a film based on the book?

WELLES: Not even based on. It’s a film inspired by the book, in which my collaborator and partner is Kafka. That may sound like a pompous thing to say, but I’m afraid that it does remain a Welles film and although I have tried to be faithful to what I take to be the spirit of Kafka, the novel was written in the early twenties, and this is now 1962, and we’ve made the film in 1962, and I’ve tried to make it my film because I think that it will have more validity if it’s mine.

Such issues are at root Platonic, or at least they reach back to and have been framed by Plato’s ethics of representation. Plato was not, however, so simple a dualist. He distinguished between the worlds of essences and that of appearances noting degrees of appearances, reproduction or representation, wherein some icons or images approach the transcendent Idea or essences, and others, notably simulacra, are false or inauthentic appearances.Is theatre then, like all art, always fake, a re-presentation, a re-production of some, often remote, authentic original; the work only and always already a copy, a reproduction, a simulation, a theatrical script itself, a framework for interpretations and so of adaptations — or is there no phenomenal original, the work as presented itself iconic and so its own essence?

As an aesthetician and a hands-on, practical man of the theatre, Beckett would wrestle with such theoretical and philosophical issues as he immersed himself further and further into the world of practical performance, and he would learn over a 30-year theatrical career that the elasticity of texts, subject to a myriad of cultural forces and the collaborative nature of performance itself, the intercession of multiple artists into the process of its creation that is “this adaptation business,” are theatre’s common currency, unavoidably part of its ecology, and so adaptation is the currency of performative art, not its exception. Perhaps even more so in the hands of commercial theater managers, the pros, the adepts of Broadway and the West End, who are explicitly driven by economic and political forces. Authors are generally not part of that ecology. A case in point involves playwright Tennessee Williams. Writing in The New York Times on 2 November 2003, Jason Zinoman cites Kenneth Tynan’s comments on the original New York production of Williams’s play Cat on a Hot Tin Roof:

When the legendary theater critic Kenneth Tynan saw the 1955 Broadway premiere of “Cat on a Hot Tin Roof,” directed by Elia Kazan, he thought something was amiss. “[. . .] there were moments of unaccountable wrongness, as if a kazoo had intruded into a string quartet,” he wrote in an essay for Mademoiselle magazine.

Tynan discovered the source of his discontent when he compared Tennessee Williams’s original 1954 script with the Broadway version, which included a revamped third act, with changes recommended by Kazan. “The kazoo,” Tynan wrote, “was Kazan.”

Kazan had encouraged Williams to soften the play’s bleak conclusion for a Broadway audience.

In the world of performance then, questions of production and reproduction, of originals and copies, of essences and simulacra, of purity and corruption, are questions of adaptation and so matters of degree rather than of kind.