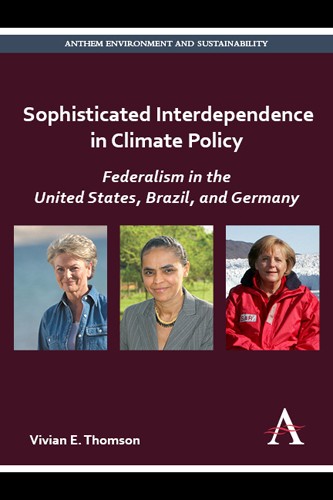 The following is an interview with Vivian Thomson, author of
“Sophisticated Interdependence in Climate Change Policy: Federalism in the United States, Brazil, and Germany”

This book offers a desperately needed framework for climate-change policy in the US, acknowledging the crucial role of coherent state–federal relations.

Q: What does the term ‘Sophisticated Interdependence’ mean?

Vivian Thomson: Washington, DC needs help in the climate change policy arena. In June 2014 the US Environmental Protection Agency will set the stage for the 50 states to regulate electrical power plant carbon dioxide emissions, which constitute about 30 percent of US greenhouse gas pollution.  The states have long worked with EPA to control regional or local air pollution under the Clean Air Act.  But we are in uncharted waters because of climate change’s global scale and also because some US states have forged ahead of the national government in the climate and renewable energy arena.
I borrowed the term ‘sophisticated interdependence’ from Patricia Mulroy, longtime head of Las Vegas’s water authority and veteran of Colorado River water rights battles.  In my book ‘sophisticated interdependence’ means: (1) framing US state-national partnerships so as to intertwine climate protection, energy security, fiscal discipline, renewable energy, environmental justice, and energy diversification; (2) connecting domestic actions with those abroad in nations like Germany and Brazil; and, (3) integrating the variable constraints and opportunities faced by the US states into the plans approved by EPA.

Q: Why look to Germany and Brazil for instructive lessons?

VT: Brazil and Germany represent distinctive powerhouse foils for the United States.
The focus of ‘Sophisticated Interdependence’ is state-national relations in climate and energy policymaking. The United States, Brazil, and Germany have the highest GDPs of any federal nations, that is, nations in which sub-national political entities have powers independent of the national government. Brazil and Germany both speak forcefully in the global climate arena.   While each nation’s political institutions have a unique stamp, born of different circumstances and traditions, cross-country comparisons can stimulate new ways of thinking and help foster international collaboration.

Germany has long been a leader in climate change and renewable energy, and the German Länder (states) compete with one another in these arenas.  These policy choices have gone hand-in-hand with economic growth that out-strips that in the US on a per capita basis. Between 1990 and 2010 Germany’s greenhouse gas emissions per capita dropped by 26 percent even as the country’s per capita GDP per capita expanded by 36 percent.  In the same interval per capita GDP in the US grew slightly less, by 31 percent, and greenhouse gas emissions per capita decreased by a paltry 2 percent.

In Brazil the division of responsibilities between state and national authorities in climate policy is still being sorted out. But much interesting activity is taking place, including the national government’s ongoing commitment to reducing deforestation in the Amazon.  At the same time, the economically powerful, populous Southeast states of São Paulo and Rio de Janeiro have undertaken their own climate change programs.  Brazil’s strong regionalism, based partly on race, echoes that in the United States.

Brazil’s energy security provides a fascinating contrast to the energy insecurity of the United States and Germany.  Brazilians should never have to spend trillions of dollars on foreign wars to fuel their cars or worry about Russia cutting off natural gas supplies.

Q: You say that  ‘Climate change is an especially complicated tragedy of the global commons for several reasons.  Industrialized countries like the United States have prospered while freely spewing greenhouse gases that affect the whole world.  The costs of controlling greenhouse gases are concentrated while the benefits are shared, diffuse, and deferred’. Is ‘not believing in Climate Change’ still an issue in the United States that prevents effective action?

US leaders can help educate the public by following their overseas counterparts, like Chancellor Merkel, in framing the issue in terms of achieving fiscal discipline, energy security, economic competitiveness, and environmental justice.

But action in the US political system does not depend on national polls. The US Supreme Court recognized in 2007 that the harms associated with climate change are “serious and well recognized.” Because of that landmark decision the US EPA is using the Clean Air Act to regulate greenhouse gases from vehicles and from stationary sources.  Although we have no national climate or renewable energy law, many states have filled that policy vacuum.

The US is a patchwork quilt nation with striking regional distinctions. In my book I analyze a wide variety of factors that help illuminate differences in state-level action. Among the important factors separating active from passive states are the use or production of coal, the nature of the state’s political culture, and the degree of state-level legislative professionalism.

The net result of sub-national regulatory action, the Great Recession, and the market-driven substitution of natural gas for coal in electricity generation is that the US’s greenhouse gas emissions are at their lowest level since 1994.   But we must enact policies to maintain this progress, even if market forces change.

The goals of ‘Sophisticated Interdependence’ are to light that path domestically and to emphasize the importance of connecting with our global colleagues along the way.

← Anthem Library of the Month | DON L. LOVE LIBRARY
Interview with Magda Romanska, author of “The Post-traumatic Theatre of Grotowski and Kantor” →